Giving new life to some of Pompeii’s dead 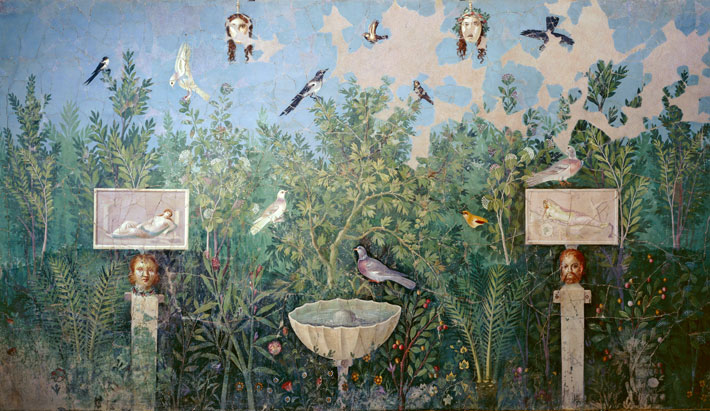 The three-story House of the Golden Bracelet on the Vicolo del Farmacista was one of the most opulent in Pompeii, its walls covered with vibrant frescoes depicting theatrical scenes and imitating expensive marble paneling, its floors paved with intricate black-and-white geometric mosaics. At the rear of the house lay a verdant garden with a splashing fountain and quiet pools, its natural beauty echoed by wall paintings depicting oleander, viburnum, arbutus, bay, palm trees, irises, roses, daisies, and poppies, home to doves and house sparrows, a swallow, a golden oriole, and a jay. From the terrace was a view of the sea, whose breezes cooled the house during hot Mediterranean summers.

The morning of August 24, A.D. 79, was relatively quiet in Pompeii, perhaps disturbed only slightly by a series of earthquakes common enough to the region. But by just past noon things drastically changed, when, according to the first-century Roman writer Pliny the Younger, a cloud of “unusual size and appearance” spewed from nearby Mount Vesuvius. Soon ash, pumice, and stone began to fall, flames could be seen leaping from the mountain, buildings shook and swayed, and, in places, although it was still day, there was “darkness blacker and denser than ordinary night.” For two days, the volcano erupted ferociously, on the first day expelling millions of tons of debris, burying Pompeii at a rate of roughly six inches an hour. Thousands of people were trapped: “You could hear the shrieks of women, the wailing of infants, and the shouting of men; some were calling to their parents, others their children or their wives, trying to recognize them by their voices,” writes Pliny. On the second day, surges of superheated rock, ash, and gases, called pyroclastic flows, rushed down the mountain at speeds of more than 100 miles per hour, flattening the buildings that remained standing, and scalding or perhaps suffocating those who had not already been buried. By the end of August 25, more than 2,000 people likely had died in Pompeii, and at least 15,000 had probably perished in the region. 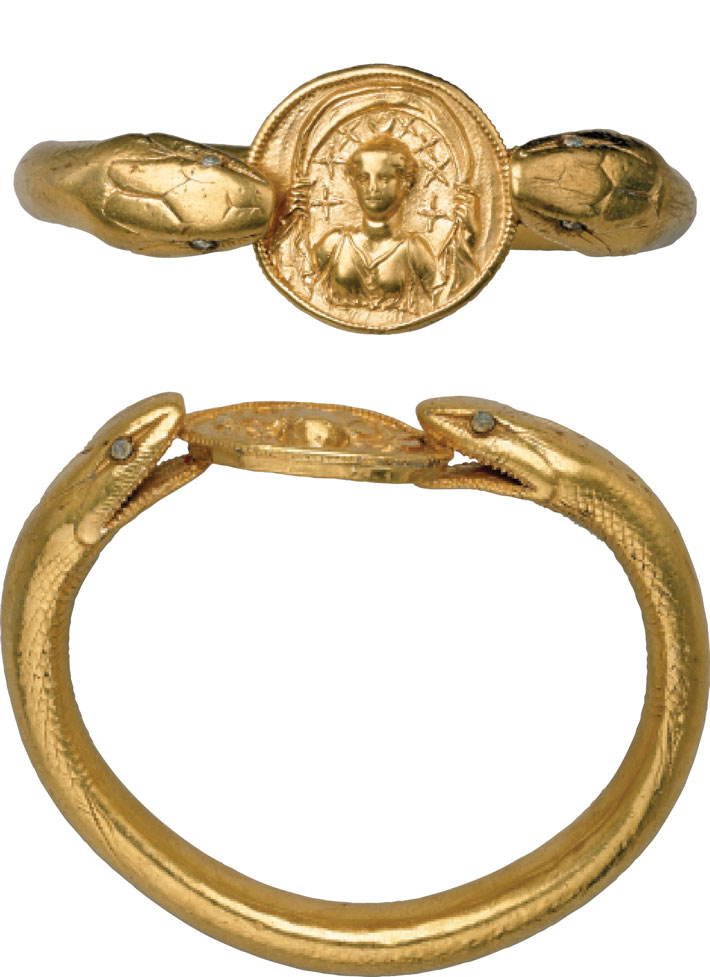 Giuseppe Fiorelli became director of excavations in Pompeii in 1860. Realizing that it was not just structures, paintings, mosaics, and artifacts that had been covered by volcanic debris, but also plants, animals, and people, Fiorelli developed a new method for recovering these once-living specimens. When excavators encountered voids in the hardened ash and pumice created by the decay of organic material, they poured plaster into them. They then left the plaster to dry, after which they removed the material around the plaster, revealing the bodies of victims at the very moments of their deaths.

In 1974 four people were discovered in voids under a flight of stairs leading to the House of the Golden Bracelet’s garden. Using the technique pioneered by Fiorelli, casts were made of the bodies, revealing them to be a man, a woman, and two small children who had likely died on the eruption’s second day, killed either by the collapse of the staircase or by the pyroclastic flow. The casts have now been moved to a lab in Pompeii as part of an ambitious project to study and restore 86 of the 103 that have been made, including the four people from the House of the Golden Bracelet. Some casts are more than 150 years old, and their surfaces have become marred and pitted. Iron rods used for reinforcement have rusted and expanded, cracking the casts, and preserved bones have decayed. Even some of the newer ones (the most recent was made in 1999) have shown need of immediate care. “We decided to undertake this project now because we need to maintain the casts’ structural integrity. It will also bring the story of Pompeii’s destruction to those living now, and to future generations,” says Stefano Vanacore, the director of the lab in Pompeii. None of the casts has ever been restored, presenting the team with a huge challenge. “There was no experience of how to restore the casts, and no single way to do so because they were made over such a long time using many different materials,” Vanacore says. “For example, Fiorelli used very high-quality plaster reinforced with wood, so his casts are in much better condition than those made later with poorer quality materials.”

To begin the process, restorers brushed loose debris from the casts, cleaned their surfaces using quick-evaporating chemical solutions, and reattached loose fragments and broken limbs. To consolidate them, they used an acrylic resin suitable for both plaster and bone, and, where possible, replaced the iron rods with non-corrosive fiberglass. “We had to make sure that there were no adverse reactions between the different, old materials, and the new ones we introduced,” says Vanacore. The work did not stop there. All 86 casts have been scanned with lasers to create 3-D images that are giving researchers a highly detailed view of their surface deterioration. In addition, small copies of the casts were made using 3-D printing technology. Of the 86, 16 were moved to a lab for CT scans—the choice of which casts to scan was determined by which could fit through the scanner’s opening—allowing researchers to see inside them for the first time. “We don’t just want to restore the casts, we also want to better understand the eating habits, diseases, and even causes of death of these ancient Pompeians,” explains Vanacore. “For example, we learned that they didn’t have cavities or tooth decay, likely because they had a low-sugar diet and used only sweeteners derived from fruit.”

In addition to such new information about the overall health of the city’s inhabitants now being revealed by the scans, the work may also provide specific details of some individuals’ lives. For example, CT scans of the teeth of one of the children from the House of the Golden Bracelet, the only child to be scanned, shows that he was between four and five years old at the time of his death, not three as had previously been thought. Researchers also discovered that he wore an amulet around his neck—it had never been seen before because it was deeply embedded in the plaster. DNA testing currently under way may help determine the relationships between the four people hiding under the stairs on that day in August.

For anyone who sees the casts, it’s impossible not to be affected by them. “I have a lot of emotions when I look at the casts,” says Vanacore. “The restoration is a scientific intervention and an investigation of the deaths caused by Vesuvius, but I have respect for what and how unique these casts are. For example, I think of the family in the House of the Golden Bracelet, joined together until death. They aren’t just graphic representations of people, but actual people made of bones, teeth, and skulls. Though they lived a long time ago, they were people just like us.”

Jarrett A. Lobell is executive editor at ARCHAEOLOGY. 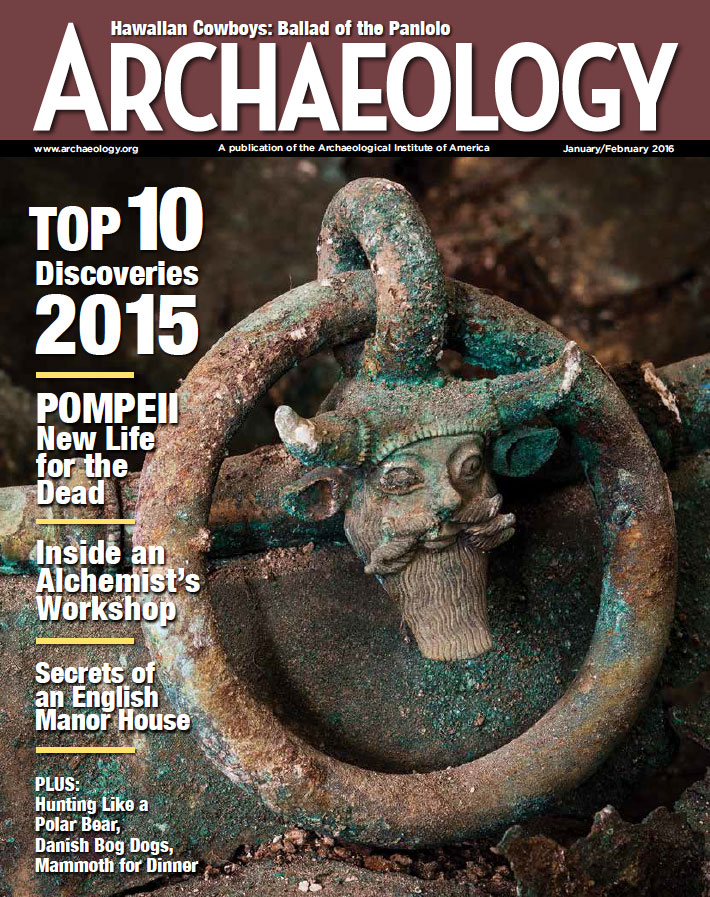 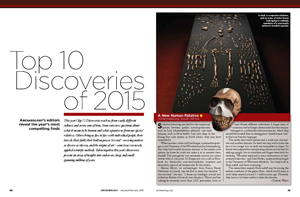