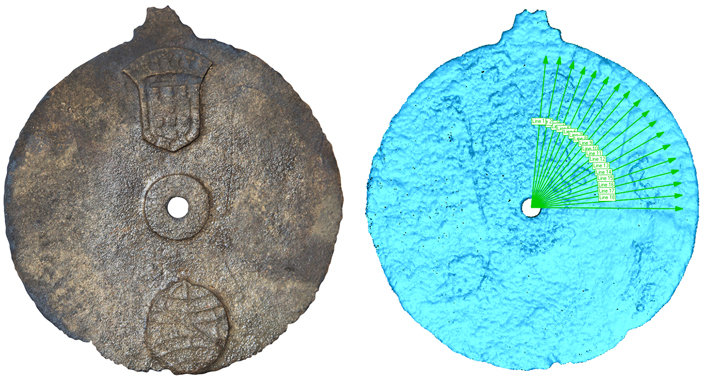 Over the past several years, divers have retrieved thousands of objects from the wreck site of the Portuguese ship Esmeralda off the coast of Oman. The ship was originally part of an armada led by Vasco de Gama, but sank in a storm in 1503. One of the artifacts, a bronze disc measuring around seven inches in diameter, was recently confirmed to be a rare astrolabe, a type of navigational instrument. When the object was first brought to the surface it was unclear what it might be, since all lines and nautical markings had disappeared. Only two symbols remained visible—the Portuguese coat of arms and the personal emblem of King Dom Manuel I. However, 3-D laser scanning undertaken by the University of Warwick revealed 18 etched lines radiating from the disc’s center, each separated by five-degree increments. Sailors used these markings to measure the sun’s height above the horizon at noon, which helped them determine their location.