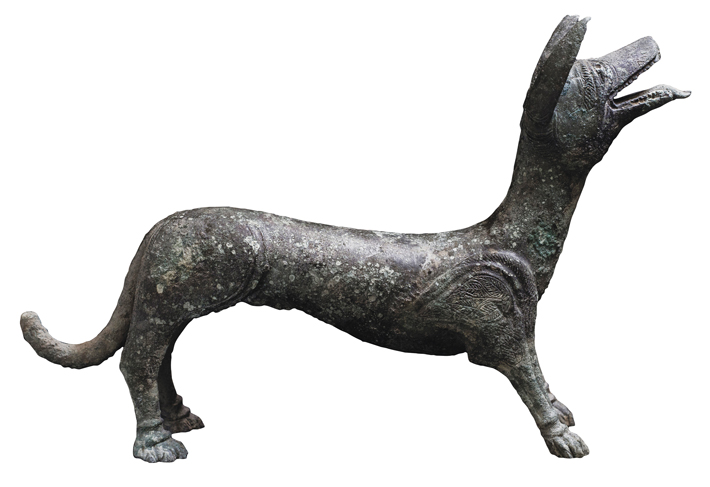 Anyone who has ever had a dog knows they are good for your health. Dogs can be trained to help people suffering from such disorders as seizures, and petting a dog can lower your blood pressure and reduce the risk of stress-related illnesses. The healing power of dogs was well known in antiquity, too. At Epidaurus, the sanctuary dedicated to Asclepius, the ancient Greek god of medicine, sacred dogs (and snakes) are said to have licked the wounds of pilgrims who came to be cured. An inscription found at the site records that a growth on a boy’s neck was healed when one of the temple’s dogs licked it.

This finely crafted canine may also have a connection to ancient medicine. The statue was found recently in a hoard of more than 30 artifacts, all of which—with the exception of the dog—were deliberately broken, says archaeologist Kurt Adams of the Portable Antiquities Scheme. The dog is depicted with its tongue protruding—either panting, or, says Adams, perhaps more likely, licking. It’s possible that the statue was associated with a cult center not far from where the hoard was found. “Representations of licking dogs are very rare and they are often associated with healing,” says Adams. “It’s tempting to draw connections with the nearby Roman temple at Lydney, which was dedicated to Nodens, a god of hunting, the sea, and, importantly for us, healing.”