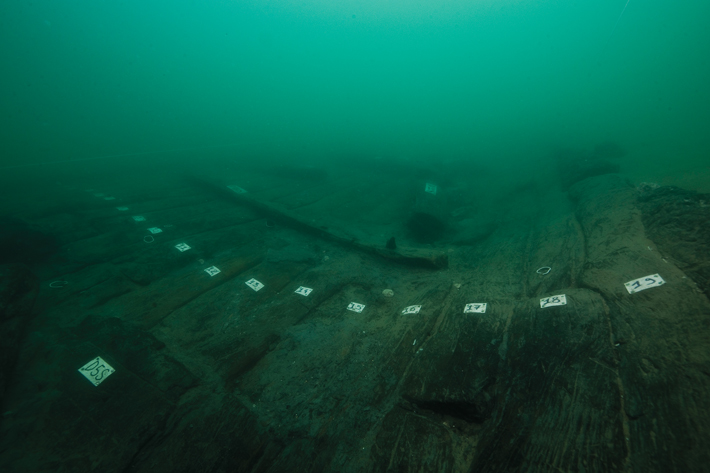 Their boats with which they carry cargoes are made of the acacia, of which the form is most like that of the Cyrenean lotus, and its sap is gum. From this acacia, then, they cut planks two cubits long and arrange them like bricks, building their ships in the following way: on the strong and long tenons they insert two-cubit planks.

For the first time, researchers working in a ship graveyard in the ancient Egyptian port city of Thonis-Heracleion have identified a vessel precisely matching the firsthand description given by the fifth-century B.C. Greek historian Herodotus of a common type of Egyptian cargo ship known as a baris. “It’s a very rare case when a written source and archaeological material make such a perfect match,” says archaeologist Alexander Belov of the Russian Academy of Sciences. The short, thick planks of local acacia wood that form the hull of what is known as Ship 17 are arranged in the staggered, brick-like pattern described by Herodotus, and its keel contains a shaft that the historian notes held a rudder.

Dozens of other similar barides that remain submerged at the site appear to have been discarded after years of transporting goods on the Nile, Belov explains. Ship 17, which was sunk before the mid-fourth century B.C. and pinned to the seabed with wooden poles, seems to have been used to increase the length of a nearby pier.