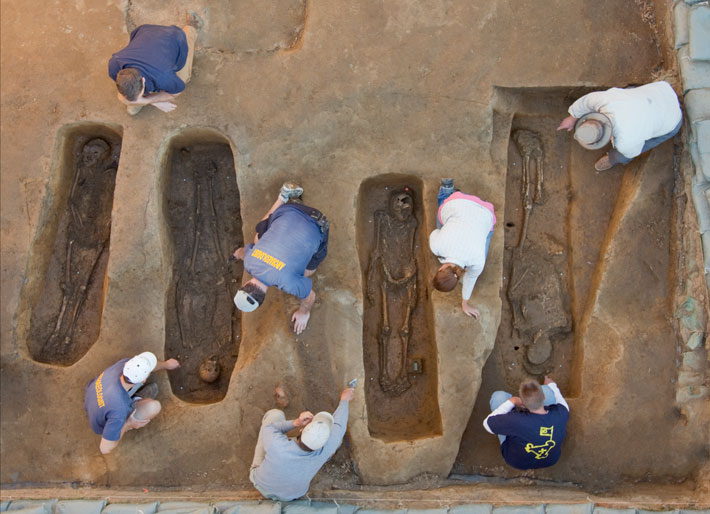 Jamestown, the first permanent English settlement in the Americas, is perhaps the United States’ most consistently prolific archaeological site. This year researchers have analyzed four previously excavated graves found in the chancel of the original 1608 church, a burial location surely reserved for prominent figures. Scientific, forensic, and genealogical work identified the remains of four members of Jamestown’s leadership—and turned up at least one new mystery.

The Chaplain—Reverend Robert Hunt, the chaplain of the settlement, is thought to have died in 1608. His remains were wrapped in a shroud instead of a coffin, reflecting his piety, and he was buried facing the congregation.

The Soldier—By contrast, Captain William West, killed by Native Americans in 1610, was buried in an ornate coffin, of which only the nails remain. His bones had high lead content, due to use of high-status drinking vessels, and found with him were the delicate remnants of a silk military sash.

The Nobleman—An even more elaborate, human-shaped coffin held the remains of Sir Ferdinando Wainman, Jamestown’s master of ordnance, who died during the “starving time” of 1609–1610, when some 70 percent of the colonists perished. His remains also had the high lead content of an aristocrat.

The Explorer—Captain Gabriel Archer, another victim of the starving time, had explored much of the northeast coast of America before the colony was established. His grave contained a fragment of a staff carried by British officers, as well as a silver box holding human bone fragments and a lead ampulla—almost certainly a Catholic reliquary. Was Archer a secret Catholic in the Protestant colony, or was the box repurposed and given some new significance for the first American outpost of the Anglican Church?