Tomb of a Highborn Celt 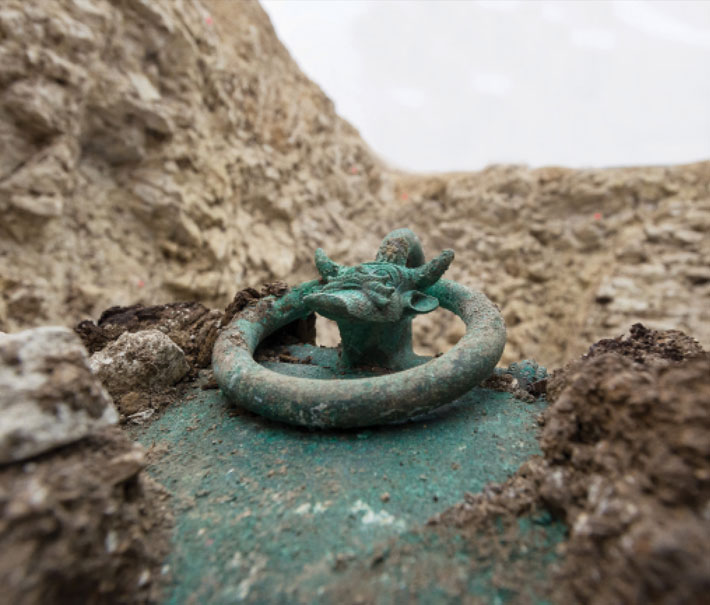 During a routine investigation of an area slated for construction in the village of Lavau in north-central France, archaeologists happened upon one of the most remarkable Iron Age discoveries of the past century. Beneath a mound measuring 130 feet in diameter, researchers from France’s National Institute of Preventive Archaeological Research were stunned to find the burial of an early Celtic “prince” dating to the fifth century B.C. They were initially unable to determine the individual’s gender, and some of the accoutrements associated with dress found near the body suggested the skeleton belonged to a woman. But testing has now confirmed with certainty that the deceased was, in fact, male.

This wealthy Iron Age prince was buried with an assortment of luxury items, including imported Mediterranean vessels, gold jewelry, and a chariot. A finely crafted bronze wine cauldron decorated with the heads of animals and mythological creatures, and a black-figure Greek wine pitcher, indicate that the Celts in this area had robust trade and political ties with the Greeks and Etruscans—and also distinguish this as the grave of a significant person. “He had to be at the top of the local aristocracy,” says archaeologist Bastien Dubuis. “All this wealth is a reflection of the central importance of the character buried here, who exercised economic and political power in the region.”

Imported Mediterranean wine was a key commodity for the early Celts. This burial and others like it demonstrate that rituals and paraphernalia associated with the drinking and distribution of wine played a vital role in Celtic society.