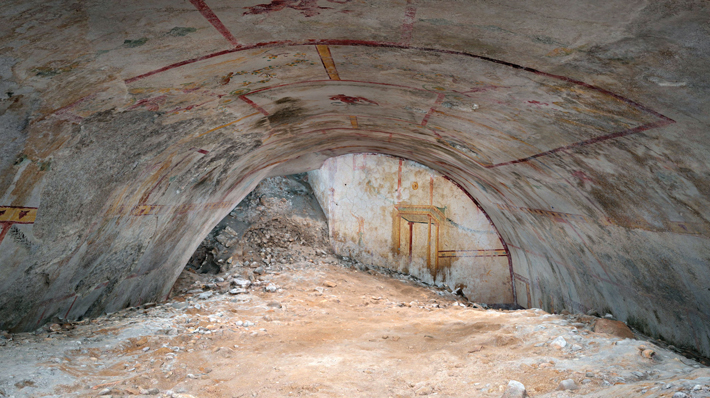 A small crack in a vaulted ceiling led archaeologists to a new room of the Domus Aurea, or “Golden House,” the immense pleasure palace built by the emperor Nero after a fire devastated Rome in A.D. 64. After Nero’s death, the Domus Aurea was seen as the emperor’s folly, and the structure’s interior was completely filled in. A public park for all Romans to enjoy was built on top. It was not until the fifteenth century that, quite by accident, the vast property was rediscovered. Since then, the Domus Aurea has been the site of exploration, excavation—and nearly constant restoration. During one such restoration project, archaeologists found the new room, which is covered in frescoes. “It was very emotional for us to find a previously unknown room, or maybe one that we had lost track of,” says archaeologist Alessandro d’Alessio of the Italian Ministry of Cultural Heritage. The frescoes depict a centaur and other mythological figures, a whistle-like instrument, decorative plants, and a column topped with a golden bowl and sphinx that has given the space its name, the “Room of the Sphinxes.”