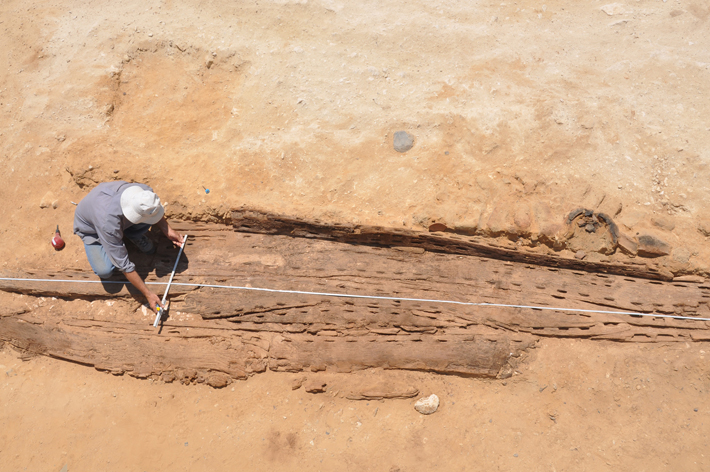 Egyptologist Yann Tristant was reading a 1914 excavation report on a First Dynasty (ca. 3150–2890 B.C.) tomb at the elite cemetery of Abu Rawash when he noticed something strange. The author, legendary French archaeologist Pierre Montet, wrote that just north of the mudbrick tomb, or mastaba, he had uncovered a wooden floor. That seemed bizarre to Tristant, of Macquarie University in Sydney, because he knew that no other archaeologists have reported finding wooden floors around mastabas. Sensing a mystery, he directed his team to excavate at the same spot Montet had almost a century before. The hunch paid off and led Tristant to a pit bounded by a brick wall that held the oldest boat found in Egypt, a 20-footlong vessel dating to 2950 B.C.

It’s clear the boat played some role in the burial ceremonies of the tomb’s owner, a high-ranking official. Tristant uncovered artifacts nearby that point to a lavish funerary feast, including ceramic beer jars and bread molds. Ceremonial boats have been found at tombs at royal cemeteries; they were intended to symbolically carry pharaohs into the afterlife. But since so few boats have been found at nonroyal tombs, Tristant hesitates to speculate exactly what religious function the Abu Rawash vessel served. “It’s a good example of why we must sometimes re-excavate sites,” says Tristant. “I never would have expected to find a boat at a tomb like this.”